When concerns (verbal) and complaints (written) are dealt with through an agreed process that is understood by everyone involved in the school a positive resolution is more likely to be achieved.

2. Staff who have concerns or complaints should attempt to resolve these with their syndicate leaders. If a satisfactory outcome is not reached, the matter should be taken up with a member of the Senior Management Team.

3.Parents who have concerns should take these to the class teacher of the child. If a satisfactory resolution is not achieved the matter should be taken up with the leader of the unit the child is based in.

4. When a concern has not been able to be resolved between a parent / caregiver/ staff member and the syndicate leader, the matter should be referred to the Principal.  The Principal will then discuss the matter with the parties concerned, with the intention of reaching a resolution.

6. Any member of the Board of Trustees who is the complainant, or who is the subject of the complaint, will take no part in the discussion about it, but may submit a written statement on the matter.

7. Any outcome that is achieved should be fair to all parties concerned.

8. Parent concerns regarding sexual and / or physical abuse or suspected abuse of this nature should be addressed in the first instance to the Principal.

9. Should an unresolved concern be about the Principal the matter should be raised with the BoT Chairperson.

10. Unresolved concerns about staff or from staff (teaching and ancillary) should be    directed to the Principal in the first instance.

11. A formal complaint must be in writing and directed first, to the Principal.  The Principal will acknowledge the receipt of the complaint in writing within three  working days.

12. A formal complaint against the Principal must be in writing and is to be directed to the Chairperson of the Board of Trustees.

13. The number, type and status of written complaints and any other dispute matters of concern to the Principal must be reported to the Board of Trustees by the Principal.

14. When a matter of dispute has been raised the Principal and / or the staff member involved must keep records of all meetings, any agreements made and actions taken.  Appropriate confidentiality is maintained.

15. Kōwhai Special School is party to the relevant awards, and these identify clear procedures for dealing with formal complaints.  School management will be cognizant of the terms and conditions of relevant Collective Employment Agreement. Advice will be sought from NZSTA.  The Board of Trustees will be kept informed.

17. In applying formal complaint procedures or attempting to resolve a dispute, the Board must adhere to the rule of Natural Justice:

Concerns and complaints are best dealt with at an early stage and before problems reach serious proportions.  Discussion will resolve almost all concerns.

To help you with this we have produced the table below as a supplement to our Concerns and Complaints Policy.

This is to be used as a ready reference providing you with information on the correct path to be taken when you have any unresolved issues, concerns and complaints. A copy of this document as well as the full Concerns and Complaints Policy is available on our website. 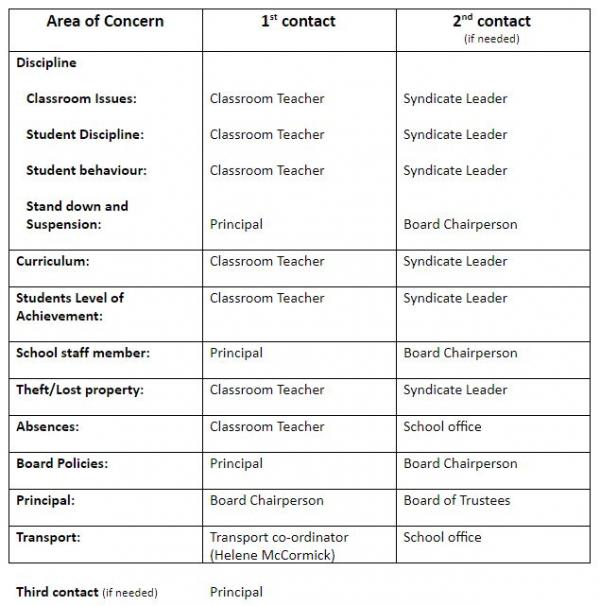